The Alternative Minimum Tax—What You Need to Know 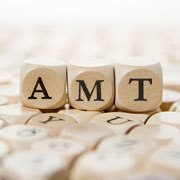 Congress originally devised the alternative minimum tax (AMT) rules to ensure that high-income individuals who take advantage of multiple tax breaks will owe something to Uncle Sam each year. In recent years, however, that concept has eroded. Now, even upper-middle-income taxpayers are likely to owe the AMT. Here’s an overview of how the AMT works and possible ways to minimize it.

In addition, taxpayers are allowed a relatively large inflation-adjusted AMT exemption, which is deducted when you calculate AMT income. Unfortunately, the exemption is phased out when your AMT income surpasses certain levels.

If your AMT liability exceeds your regular federal income tax liability for the tax year, you must pay the higher AMT amount.

Why Upper-Middle-Income Taxpayers Get Hit

After repetitive tax law changes, the AMT often doesn’t apply to the wealthiest taxpayers in the highest tax bracket. That’s because many of their tax breaks are already cut back or eliminated under the regular federal income tax rules before getting to the AMT calculation.

For instance, the passive activity loss rules greatly restrict the tax benefits that can be reaped from “shelter” investments, including rental real estate and limited partnerships. And, if your income exceeds certain levels, phaseout rules are likely to reduce or eliminate various tax breaks, such as personal and dependent exemption deductions, itemized deductions, higher-education tax credits, and deductions for college loan interest.

Moreover, individuals in the 35% or 39.6% tax brackets are less likely to be hit with the AMT, which has a maximum tax rate of 28%. Finally, the AMT exemption—which is deducted when you calculate AMT income—is phased out as income goes up. This phaseout has little or no impact on individuals with the highest incomes, but it increases the likelihood that upper-middle-income taxpayers will owe the AMT.

Various inter-related factors make it hard to pinpoint who will be hit by the AMT. But taxpayers are generally more at risk if they have:

Another noteworthy factor that’s likely to trigger the AMT is exercising in-the-money incentive stock options (ISOs) during the tax year. The so-called “bargain element”—the difference between the market value of the shares on the exercise date and the exercise price—doesn’t count as income under regular federal income tax rules, but it counts as income under the AMT rules.

A significant spread between a stock’s current market value and an ISO’s exercise price can result in an unexpected AMT liability. Consult your tax professional before exercising your options. Depending on current and anticipated market conditions, it may be advantageous to exercise them over several years to minimize the adverse AMT effects.

Possible Ways to Minimize the AMT

Any strategy that reduces your adjusted gross income (AGI) might help to reduce or avoid the AMT. AGI includes all taxable income items and certain non-itemized deductions, such as moving expenses and alimony paid.

By lowering AGI, you may be able to claim a higher AMT exemption. Here are some considerations that may help reduce your AGI:

Important note: Lowering AGI will also slash your state and local income taxes, which are disallowed for AMT purposes and, therefore, increase your AMT exposure. Likewise, if you’re likely to be hit with the AMT, the traditional tax year-end strategy of prepaying state and local income and property taxes that are due early next year won’t help you. Those taxes aren’t deductible under the AMT rules. So prepay them in a year when you have a chance of not being in the AMT mode.

Taxpayers can’t automatically assume they’re exempt from the AMT. Most individuals in the higher tax brackets probably have some risk factors. The IRS has trained auditors to find unsuspecting folks who owe the AMT. If you’re not careful, you could owe back taxes, interest, and potential penalties under the AMT rules.

Consult with your tax adviser about your specific situation. He or she can identify whether you’re at risk and help find ways to reduce your exposure to the AMT that also factor in current market conditions and other personal investment goals.

If you owed the AMT last year, you may have earned an AMT credit that will reduce your regular federal income tax bill in the current tax year. Many taxpayers who pay the AMT fail (or forget) to claim their rightful AMT credits the following year.

There are two reasons you earn an AMT credit for a tax year:

1. If you owed the AMT from exercising in-the-money incentive stock options, or

2. If your AMT bill was caused by claiming accelerated depreciation write-offs.

The first situation is common, especially with employees of start-ups and high-tech firms. The second typically happens only if you own an interest in a business with significant investments in depreciable assets.

Ask your tax adviser if you earned an AMT credit. But, be advised that you can claim it only if your regular federal income tax liability exceeds your AMT liability for the tax year. That’s because you’re allowed to use the credit to reduce only regular federal income taxes (not the AMT). Put another way, you can’t claim the AMT credit on your current return if you owe the AMT again this year.

So, you still must calculate your AMT liability for the current year. The difference between your AMT liability and your regular federal income tax liability is the maximum amount of AMT credit you can claim on your current-year return. In other words, you can use the AMT credit to equalize your regular federal income tax and the AMT for the current year, but that’s it. After taking this limitation into account, any leftover AMT credit is carried forward to next year.