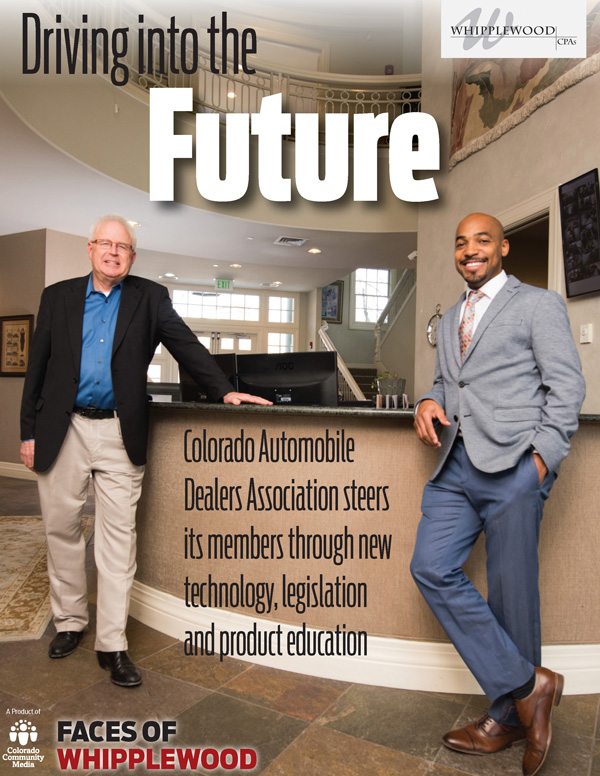 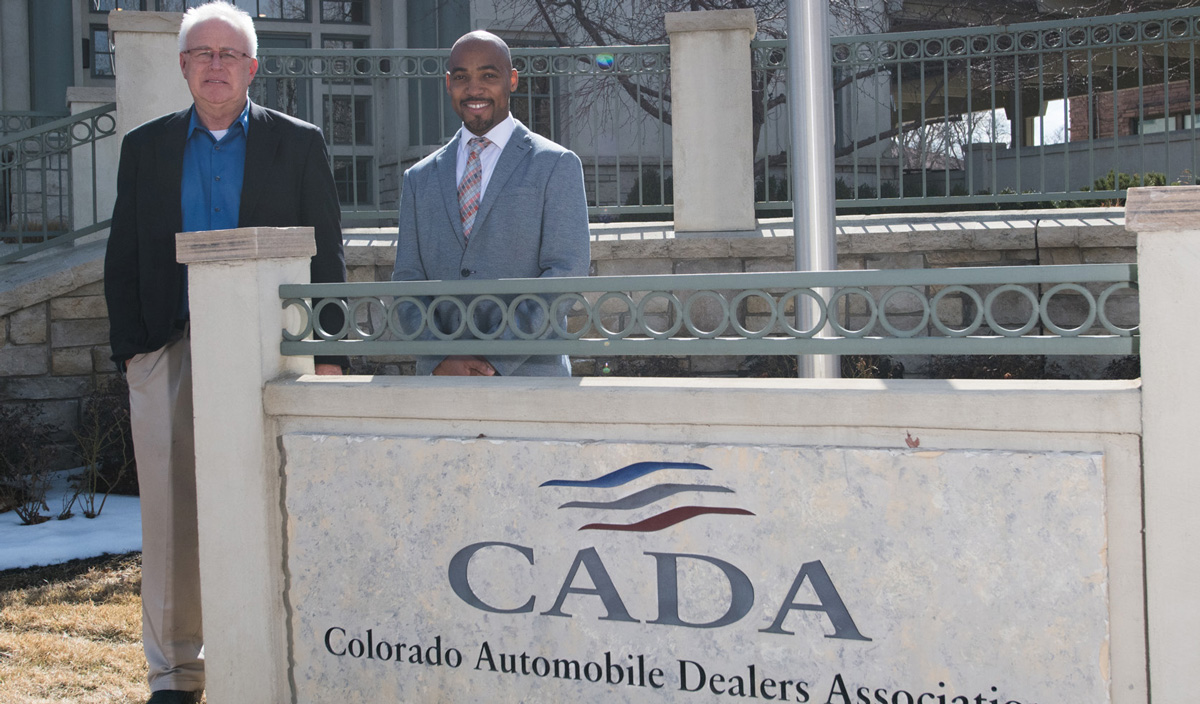 Cars may soon be driving themselves — but maneuvering the ever-evolving technologies, regulations and changes in the auto industry requires a chauffeur.

In Colorado, that chauffeur is the Colorado Automobile Dealers Association (CADA), which is busy steering its 260 members to success.

“You have to keep up with trends in the industry or, in our case, be way ahead and know the future,” said Tim Jackson, CEO and president of CADA. “Cars are getting more autonomous every day, every year. In a few years, cars will basically drive themselves.”

CADA is all about knowing what’s coming next, keeping up with what’s happening now and understanding what its members will need to be successful. Through training, program planning, lobbying for legislation, being a voice in setting policy and hosting major events such as the Denver Auto Show, CADA is the true advocate for more than 200 new-car dealers statewide.

The Colorado Automobile Dealers Association offers a multitude of training and educational programs to its members that focus on all areas in the industry. They include:

To learn more about what CADA does, visit the website at www.colorado.auto.

Because the race among industry leaders to get autonomous, or self-driving cars, on the road is so competitive, CADA has to be the state’s leader in learning policy, understanding the technology and preparing its members for the next big breakthrough in technology and product development, Jackson said.

Colorado’s continued development of self-driving technology also means an increase in regulations and policies, which is where CADA can make a difference.

“We have to understand all the policies surrounding the production and development of autonomous cars,” Jackson said. “We constantly work to make sure our dealers are up-to-date, knowledgeable and ready.”

Going beyond future technology, CADA is about driving members in the right direction.

CADA prides itself on protecting auto dealers’ interests at the state and federal level, defending against legislation that could be viewed as harmful, and introducing measures that protect both dealers and the car-buying public.

The very foundation of CADA is about protecting the auto industry’s interests in Colorado.

CADA was established in 1933 as a statewide trade association for franchised auto dealers when a small number of dealers protested a federal excise tax that would raise the price of vehicles to their customers, a move that would hurt their existing few sales.

Building on the success of stopping the excise tax, CADA was officially incorporated five years later in 1938. Its role in protecting the interests of the auto industry is even more important today, Jackson said.

In Colorado, the industry generates more than 43,000 jobs, representing an estimated $1.1 billion in total compensation.

“We represent dealer viewpoints at both the state and federal regulatory levels,” Jackson said. “Ultimately, we work to help maintain the ability for independent car dealers to not only survive, but thrive in the industry.”

CADA is governed by a board of directors. Each board member is elected annually by peers. The board is comprised of five officers, 12 district directors and up to six at-large directors.

Jackson is responsible, along with the company’s chief operating officer, for running daily operations and managing a 10-member staff at CADA’s Denver headquarters, located at 290 Speer Blvd.

Daily operations include the development of training and educational programs that focus on all areas in the industry, from advertising rules and regulations to employment law and legislative briefings.

As Jackson explained why his staff has to be up-to-date in all aspects of the auto industry, a special product-training class was being held for Chevrolet products down the hall.

With nearly 100 percent of all new-car dealerships joining the organization, CADA is constantly teaming up with auto-industry experts to host seminars, classes and provide valuable services such as bonds.

Giving Back to Community

Beyond day-to-day operations, Jackson said it’s also important for CADA to do its part.

That means helping to develop solutions for statewide issues such as finding money to help the Colorado Department of Transportation pay for the $9 billion needed to repair roads and infrastructure throughout the state.

“For some time now, fuel sales are what really has paid to keep up the roads,” Jackson said. “However, when you have an increase in electric and fuel-efficient cars on the roads, they don’t help pay for the cost of keeping up the roads. We work to partner with important groups to help solve these issues.”

Improving air quality is also a priority, which CADA’s Clear Air Foundation focuses on by removing older, high-emission cars from the road. Since 2011, the foundation has destroyed more than 3,000 high-pollution cars.

To help local nonprofit organizations, CADA also hosts the annual Preview GALA on April 3, which is a sneak peek of the Denver Auto Show, which runs from April 4 – April 8. Jackson said 100 percent of the proceeds from the event are donated to designated charities.

Changes in the auto industry will continue at every level, Jackson said. But whether it’s in new tax proposals, regulations or in product and technology, and no matter what the issue, CADA will remain the stable partner to the state’s new-car dealers. 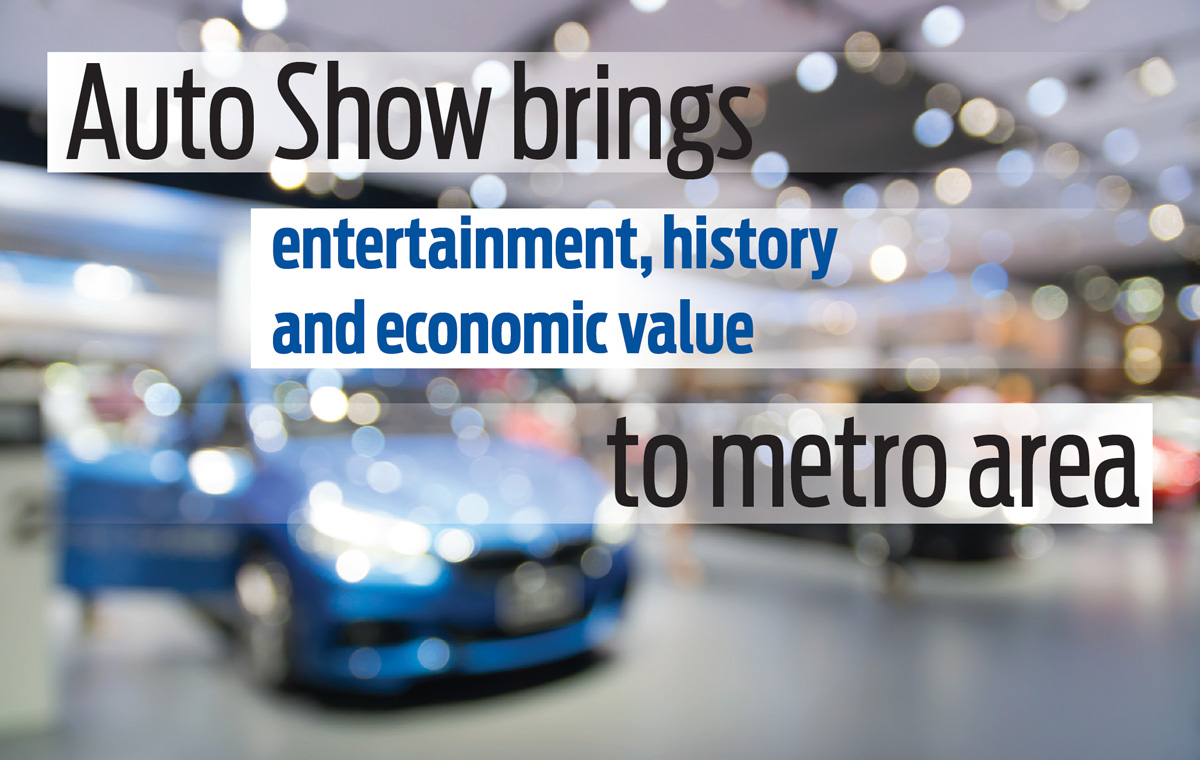 Come spring, car buffs, hobbyists and serious buyers don’t have to look far to find — in one location — a car that fits every budget and lifestyle. 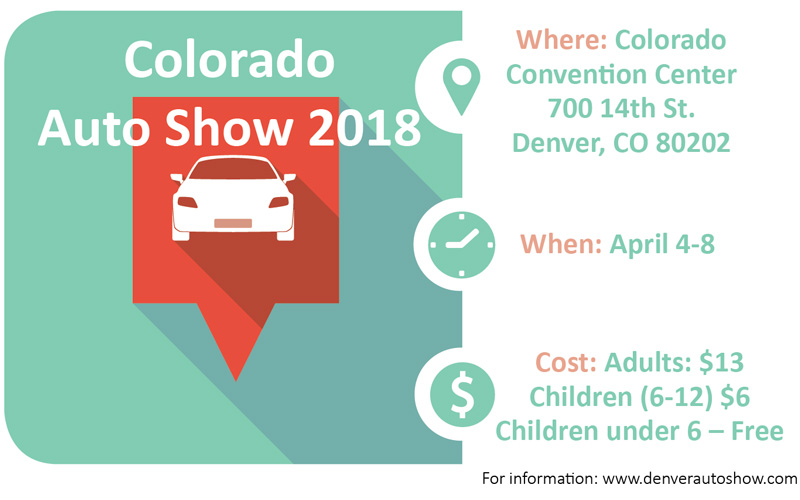 A special preview gala will be held on April 3. Proceeds from the special event will be donated to local nonprofits. For information, visit the website at https://www.previewgala.com.

Hosted by the Colorado Automobile Dealers Association (CADA), the auto show dates back to 1902, making it one of the nation’s longest-running shows. The Denver show is only predated by the New York Auto Show, which started in 1900.

Tim Jackson, president and CEO of CADA, said the show has been a long-term success for several reasons.

“Americans still have a great love affair with their cars. There are more cars on the road today than at any time in history,” he said. “Even with 5.6 million Colorado residents, there are 5.98 million cars on our state’s roads.”

Besides the floor models, the show also provides a sneak peek of selected intros, concepts and the latest tricked-out cars. The show highlights the latest examples of fuel-efficient technologies and aftermarket accessories. 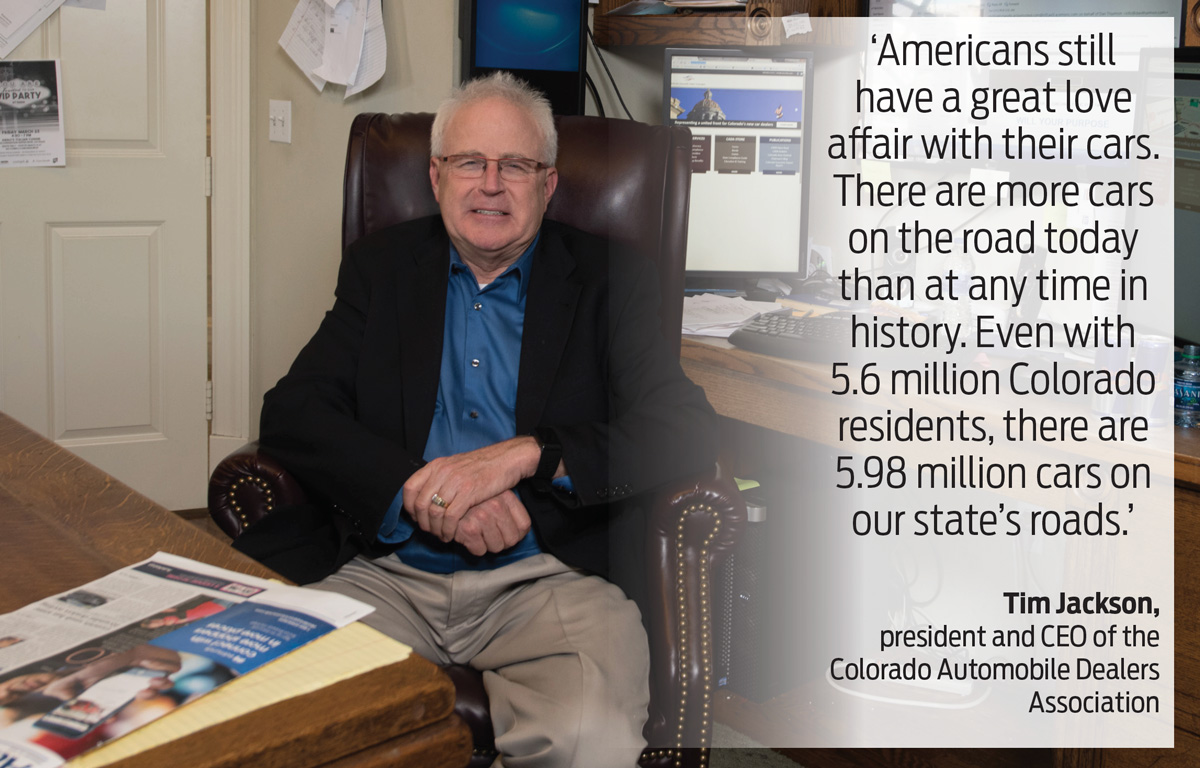 Jackson said the annual auto show is also a lot more than just a source of entertainment or research. It generates significant money for the Denver metro area.

For those shopping for a new vehicle — or just simply checking out the show to see what’s out there — the best part may be the opportunity to sit behind the wheel, pop the hood, and inspect the trunks and inner-workings of any model that catches the eye. 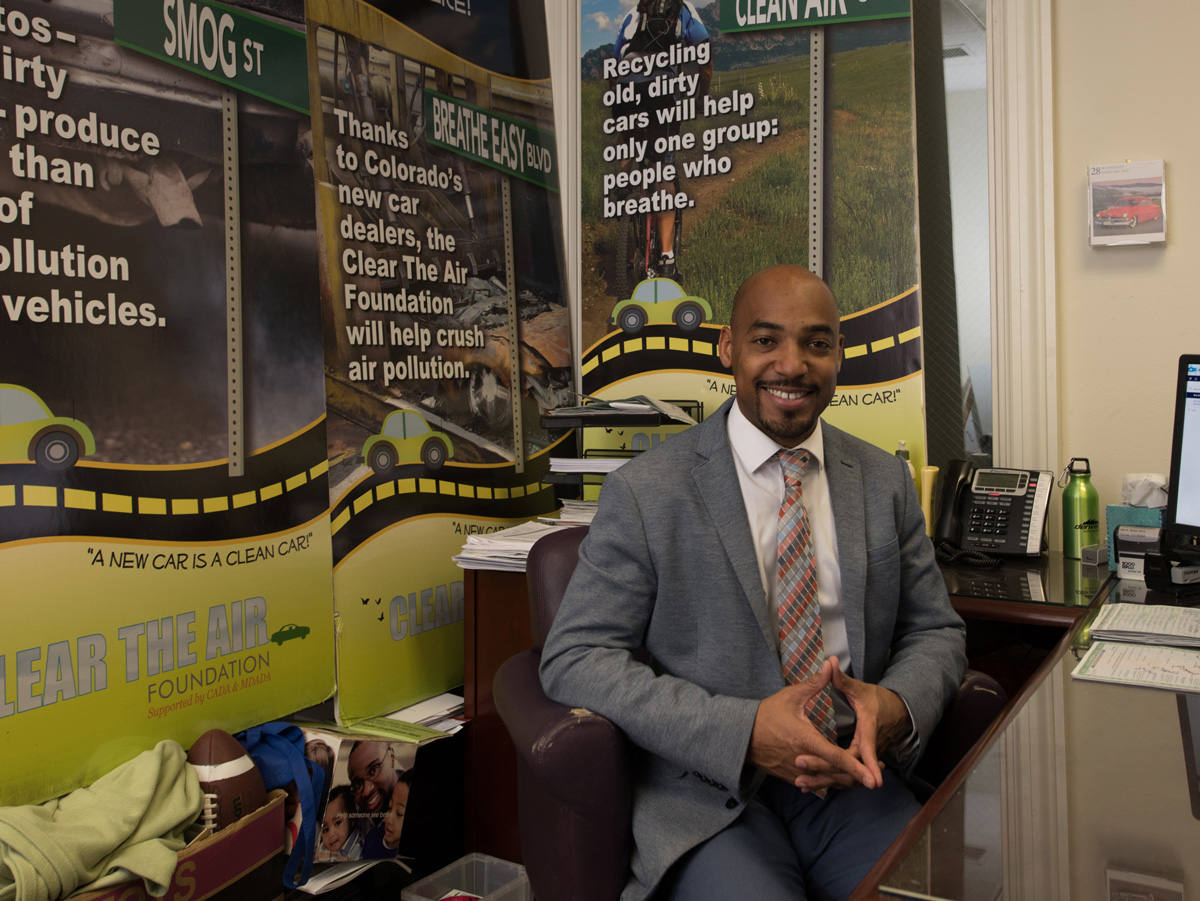 George Billings, director of the Clear Air Foundation, said they have been able to get more than 3,000 high-pollution cars off the road since 2011. One poorly-maintained, older car is worse than 100 newer-model cars.

In 2007, members of the Colorado Automobile Dealers Association (CADA) wanted to play a larger role in reducing air pollution in the state. CADA started taking notice of air pollution issues, and with studies showing how a bad car can impact the air, the organization wanted to start taking positive steps to do its part.

To achieve that goal, CADA founded the Clear Air Foundation, whose primary focus is to remove old or poorly maintained vehicles with high hydrocarbon emitters from the road.

George Billings, director of the Clear Air Foundation, explained that in terms of emissions, or the pollutants released into the air, older cars were made using lower standards, which is why they are bad for the environment.

According to the Environmental Protection Agency (EPA), there is a 99 percent difference in the amount of emissions released into the atmosphere by today’s newer cars, as compared to a car built just 10 years. By getting older cars off the road, the Clear Air Foundation makes a big difference by setting an example for other automobile associations across the nation to follow.

The EPA reports that efforts – such as those by the Clear Air Foundation – have proven to be cost effective. For every $1 spent on programs to reduce emissions, the American people receive $9 of benefits to public health and the environment. 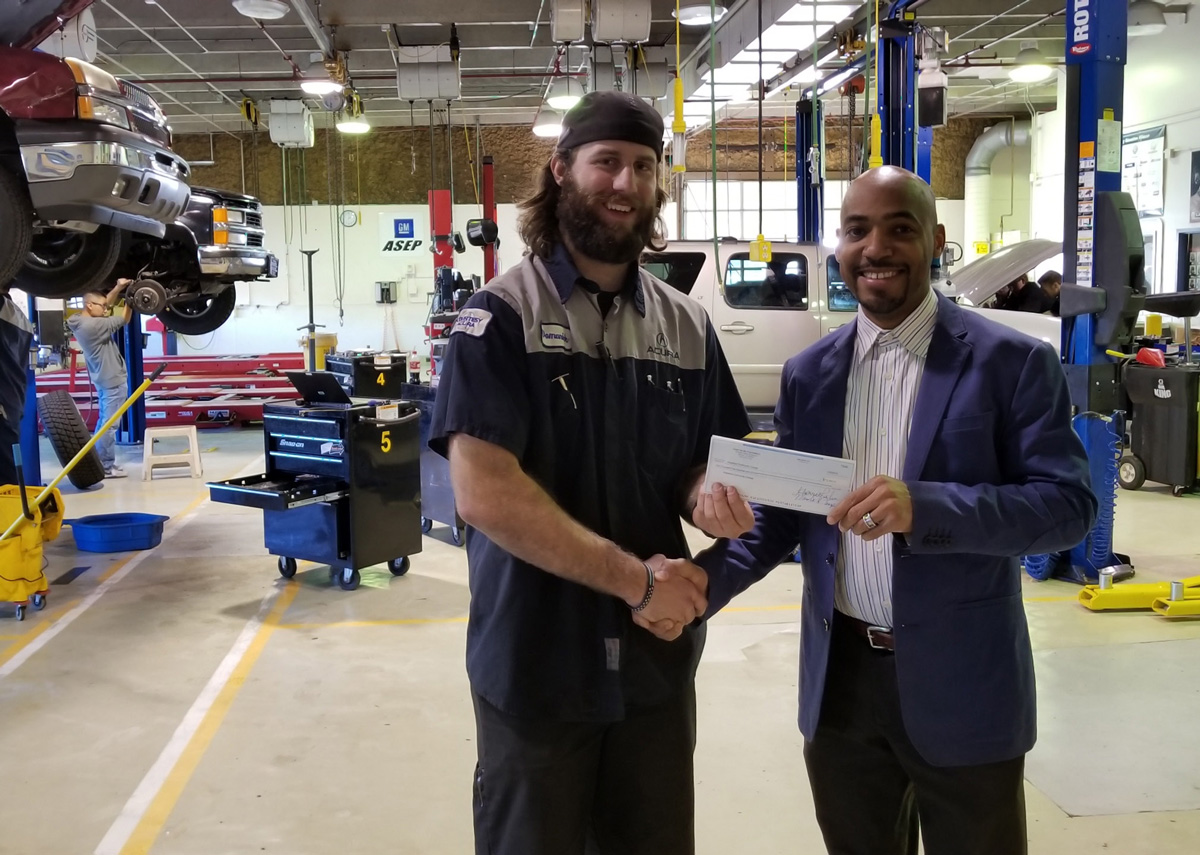 “Colorado has a huge population, and it’s important to take action wherever we can,” Billings said. “New cars today are essentially pollution free, but the old cars are causing a lot of the pollution we see in the air. Removing just one of those cars is huge.”

According to the 2017 Air Quality Report from the American Lung Association, Denver is in the top 25 of ozone-polluted cities in the nation, ranking 11th overall.

Emphasizing the impact a bad car can have on the environment, Tim Jackson, CEO and president of CADA, said one old car is worse than 100 newer-model cars on the road.

The Clear Air Foundation’s success is based on cars being donated, which participating CADA members help destroy. After a car is donated to the foundation, a vehicle transporter picks it up free of charge. The car is then taken to an auto recycling company where a participating member processes it for reusable or recyclable parts. The engine, shell and frame are then crushed, so they can never pollute again. Finally, the crushed metal is shredded and recycled for new uses.

Since 2011, the foundation has recycled and destroyed 3,193 high pollution cars.

Besides removing high-pollution cars from the roads, the Clear Air Foundation has also established a scholarship program — primarily funded by CADA members — to help students interested in the auto industry. To date, the foundation has awarded 34 scholarships, worth $50,000 in total, to students.

‘We Roll Up Our Sleeves to Help’ 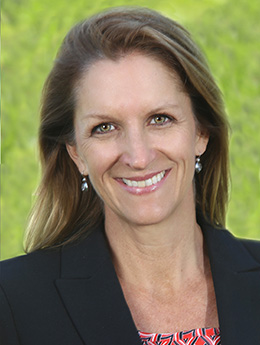 After being a part of the WhippleWood CPAs team for nearly 20 years, Mona Feeley really can’t see herself anywhere else.

“The atmosphere at the firm with both our clients and staff is embodied on being dynamic, exciting and fun,” she said. “There’s a reason this firm has been ranked as one of the top accounting firms to work for in the nation.”

Steve Grimes, firm administrator at WhippleWood, agrees: The company motto is to work well together and communicate with each other well.

“That results in excellent client service and an open culture that fosters team work and a fun environment,” he said. “We never work against each other. We’re always finding ways to help each other and build each other up. It may sound cliché, but it’s true. The firm feels more like a family than any place I’ve ever worked.”

Feeley, a partner at WhippleWood CPAs, has been involved in public accounting since 1999. She has substantial experience in providing accounting and business advisory services to individuals and closely-held businesses. She has worked extensively with pass-through entity and corporation structures and has assisted clients with developing exit planning strategies.

One of her clients includes the Colorado Automobile Dealers Association (CADA). When it comes to unique clients such as CADA, Feeley said she strives to get them to think more strategically about the future, which in CADA’s case, means creating a strategy that requires plenty of thought given its position in the state. CADA not only serves as an advocate for more than 200 new-car dealers statewide, they also do a lot with local charities, education and events – such as the Denver Auto Show.

“I think what distinguishes us from so many other firms is that we genuinely listen,” Grimes said. “So many firms listen with the intent to reply and wow their clients with their tax or accounting knowledge. We listen with the intent to understand. I think all of us here view our role with our clients as close trusted advisors, and we are oftentimes emotionally invested with our clients—their wins are our wins and we celebrate with them, and we empathize with their struggles and roll up our sleeves to help.”